In response to the overwhelming success of the Sky monitor launched in late 2016, Totem has created a tower speaker to capture the same design goals. It will launch to replace the venerable Sttaf, the most successful tower speaker in our history and a mainstay of the Totem family for 23 years. The Sky Tower assumes this role and capitalizes on a wide array of Totem’s latest technological advancements to surpass its predecessor in every way and appeal to a new generation of music lovers.

“I always aim to exceed the lofty standards set by our existing speakers, our clients, and perhaps even more challengingly, ourselves,” says Vince Bruzzese, President and founder, when discussing the design goals behind Sky Tower. “The Sttaf was so far ahead of its time and it seemed impossible to surpass its performance while respecting a price point of under $2500. However, we learn from every product developed and the substantial knowledge acquired in the Sky Monitor project guided the design of the Sky Tower. It has more dynamic range, projects a bigger soundstage, and is compatible with a wider range of electronics. It’s going to be a hard act to follow.” 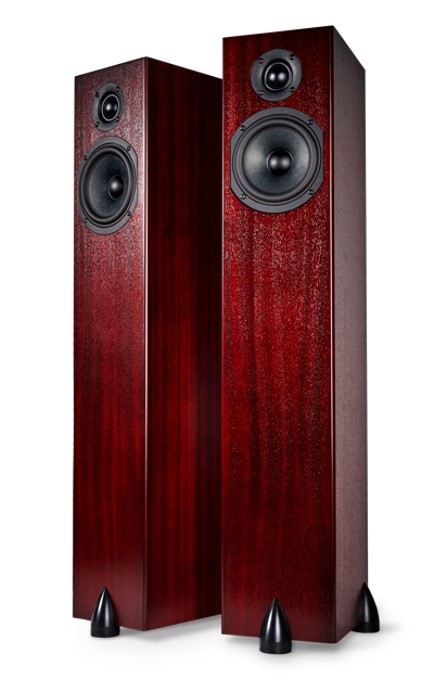 The goals of the Sky design were set out to improve and optimize certain attributes such as lifelike imaging, phase coherence, as well as deep and linear bass response. Totem has also made a considerable effort to create a speaker which allows for a great latitude of amplification compatibility.

Sky Tower possesses many unique components. A 5.75” woofer custom designed for the larger enclosure gives Sky Tower the ability to descend deeper, all the way down to 36Hz. The world’s only 1.3” soft dome tweeter capable of extending to 30kHz is mated to it and extends low enough to contribute to the midrange band and give the Tower an uncanny, enchanted charm to the range where we are most critical.

The success of Totem’s acoustic decoupling Claw on other towers made it appealing to include but the associated costs were prohibitive for the price point. A new version featuring a high-density composite achieved the target costs and breaks up the standing waves to control surface resonance, tighten bass, and heighten the soundstage.

“There were definite risks in branding this tower with a Sky designation. It creates expectations that are practically unreachable and not attaining these levels can negatively impact the existing success and reputation of the monitor,” says Lucy Lentini, Vice President of Sales and Marketing. “But, surpassing expectations provides rewards that outweigh the risks. The Sky Tower possesses the same DNA that made Sky a success but on a much larger scale, and with added impact.”

Get the latest info on new products, events, contests and more!
0